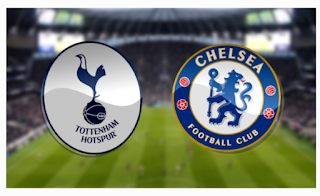 Chelsea defenders took the shine as the Blues confirmed their superiority in Sunday’s English Premier League London derby against Tottenham.

The first half however ended goalless as both team kept the affair cagy.

Coach Tuchel rang the changes at half time yanking off Mason Mount to instil some steel in the midfield with N’golo Kante.

The tweak paid immediate dividend as defender Thiago Silva broke the deadlock in the 49 minute, heading home a corner kick.

Another defender Antonio Rudiger completed Spurs’ trashing on the evening with a 90 minute shot.

With Sunday’s win, Chelsea sit atop the English Premier League table with 13 points and +11 goal difference in the five games played so far thus season.

The Blues have won four games, drawn one, scored 12 goals scored and conceded just one goal conceded this season.