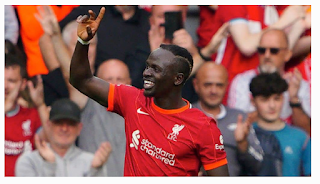 Mane, who joined Liverpool in 2016, gave Liverpool their first goal against Crystal Palace in the 43rd minute.

Egyptian striker Mohamed Salah made it two, striking into the net in the 78th minute to keep the Reds in a comfortable lead.

Naby Keita’s sensational left-foot volley in the 89th minute wrapped up the victory for Liverpool.

So far, the Reds have garnered 13 points in five games in the EPL this season.

According to him, “I told the boys after the game that this was one of the most hard-fought 3-0s I ever saw. We had to give absolutely everything.”