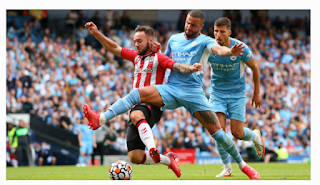 Stubborn Southampton side for 90 minutes frustrated City from seeing the back of the net despite all struggles.

The Star-studded City team had no single shot on target, while the visitors got so close in the 62nd minute, securing a penalty as Kyle Walker was shown the red card for bundling Adam Armstrong in the box.

However, a VAR review by referee Jon Moss saw the two decisions overturned, saving City from a possible defeat.

“We didn’t win because the balls forward were not good,” City’s coach Pep Guardiola said after the game, adding that “Today we didn’t have the freshness in our mind. I wouldn’t say in our legs, in our mind. It is a pity.”

Meanwhile, struggling Arsenal won their second game in the EPL this season, grabbing a crucial away three points against Burnley.

Martin Odegaard’s goal 30 minutes into the game gave the gunners their second win this season, lifting them to 13th position on the league table.

“That was a really hard-fought victory in a place that it is tough to come to and win. We had some big phases where I saw a lot of things that we want as a team,” Mikel Artera, Arsenal coach said after the game.