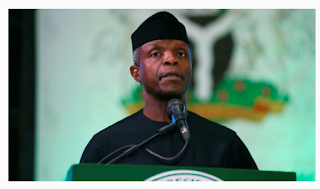 “There is no question at all that for those of us in Africa, we must make the extra effort to ensure that the democratic process is very transparent,” said Mr Osinbajo. “It is such a pleasure to see that that was what took place in your country which led to your election.”

Sao Tome and Principe went to the polls on July 18 to elect a successor to replace President Evaristo Carvalho, whose tenure from 2016 expired on September 2.

Based on constitutional provisions, an outright winner did not emerge from the polls, and a run-off led to the emergence of Nova, who will be sworn in October.

He also spoke on cooperation between Nigeria and Sao Tome and Principe.

“We already talked about some of the areas of cooperation. Your tenure might be an opportunity to bring some of those things to fruition,’’ he said.

Mr Osinbajo reassured Mr Nova of Nigeria’s support to ensure that his tenure was as comfortable and effective as possible as partners and friends.

According to him, Nigeria is a friendly country, and the relationship between both countries dates back many years.

In attendance at the meeting were the Minister of State for Foreign Affairs, Zubairu Dada and a member of the Sao Tome and Principe’s cabinet, Americo Ramos.