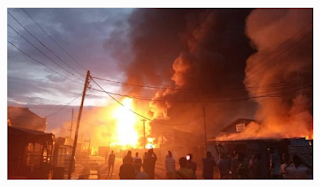 Thecitypulsenews reports that a truck loaded with illegal oil refining lost its brake while in motion and hit a moving truck trying to avoid a police checkpoint.

Peoples Gazette could not immediately confirm whether the truck was carrying illegal crude oil, popularly known in the state as Kpofire/black market.

The Gazette also could not immediately confirm the accuracy of the death rate. However, the news outlet reports that the accident left several persons injured.

The state police spokesperson was not reachable as of the time of filing this report.