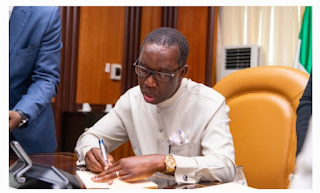 Governor Ifeanyi Okowa of Delta has signed the state’s anti-open grazing bill into law. He said the law is aimed at improving security of lives and property as well as ensuring food security across the state.

The governor further stated that the law was passed in accordance with the agreements reached at the Southern Governors’ Forum meeting earlier this year.

He assured that the measure is not intended to persecute anyone, but rather to promote peaceful coexistence based on mutual respect among state inhabitants, as well as to ensure that livestock is raised in a manner that is appropriate in today’s world.

With the new law, Delta has now joined several other southern states to give legal backing to prohibition of open grazing in the region.

This is inspite of protestations from northern elements including Kaduna governor Nasir El-Rufai who said anti-open grazing laws being enacted in the South is not implementable.