I’ll be in pain if APC fails to zone 2023 presidency to South-East: Umahi - The Naija Weekly

Home News I’ll be in pain if APC fails to zone 2023 presidency to South-East: Umahi

I’ll be in pain if APC fails to zone 2023 presidency to South-East: Umahi 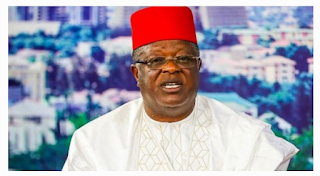 Ebonyi Governor David Umahi on Friday said he would be pained if an Igbo does not emerge as the All Progressives Congress presidential candidate come 2023.

“The heartbeat of the people of the South-East is that they should be given a chance whether in the PDP or the APC for the presidency of this country for the reason of equity, fairness and justice,” Mr Umahi said on Channels Friday evening. “If I follow APC for this length of time, and they don’t give the South-East an opportunity, I will feel bad,” Mr Umahi said.

Mr Umahi, who last year defected from the Peoples Democratic Party to the APC, said both political parties should zone their presidential tickets to the South-East in the spirit of fairness, equity and justice.

“I took that position in the PDP and one of the reasons why I took that position is because the South-Eas people have supported the PDP all the way and they have never been given any opportunity to do that,” Mr Umahi said. “I will feel bad if I stay the same length of time as I did in the PDP and that happens. But I can’t say what I will do. It depends on what God places in my mind.”

The South-East, Nigeria’s third-largest region dominated by ethnic Igbo citizens, has not produced a president since Nigeria returned to civil rule in 1999. The ruling APC has faced calls to select its presidential candidate from the zone, although the party is more widely expected to give the ticket to a politician from the North-West or South-West in order to stay competitive in the numbers game.

Mr Umahi has not declared interest in running for the presidency come 2023. But it has been said that he joined the All Progressives Congress to pursue his political ambition to be Nigeria’s President.

Peoples Gazette had in January exposed how Mr Umahi wired billions of state funds into bank accounts of Brass Engineering & Construction Nig. Ltd, a company he founded in the 1990s.

Mr Umahi did not dispute the facts in our story at the time, but his henchmen threatened to kill The Gazette’s reporters in a phone call. The governor denied any involvement in the threat.