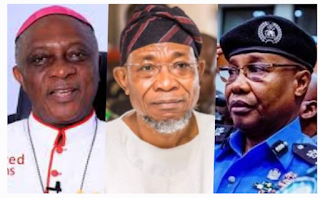 Represented by the police commissioner in Lagos, Hakeem Odumosu, Mr Usman listed factors encouraging prison congestion to include an increase in crime, effects of social dislocation, and an overburdened criminal justice system.

Similarly, the Archbishop of Lagos, Alfred Adewale-Martins, asserted that the “systemic issue” contributed to the over-population of inmates in correctional centres.

“For one to stay years on awaiting trial is a systemic issue of the criminal justice system of the society and not the fault of the suspect,” he said.

However, Mr Usman frowned at the public’s distrust of police officers.

He urged Nigerians to be friendly with the police, saying such would help nip crime in the bud, thereby checking the overpopulated prisons.

The police boss and the Lagos archbishop shared their views on Thursday at an event to commemorate the 60th anniversary of the Order of the Knight of Saint Mulumba tagged ‘Policy Advocacy Conference, Decongestion of Correctional Centres/Status Quo’ in Lagos.

During the programme, the Knight of Saint Mulumba, Lagos Metropolitan Council, explored ways to decongest the nation’s prisons.

The Metro Grand Knight of the Order, William Adebisi, explained that the overshooting of the capacity of the prisons by 120 per cent was of concern to the group.

“With not less 74,000 inmates in the nation’s correctional centres, according to the (interior) minister, adequate service delivery will be elusive,” said Mr Adebisi. “The high number of those awaiting trial is alarming, and it is responsible for this situation. It should be remedied for decent reform of inmates to take place.”

Mr Adebisi regretted that the federal government stopped the Mulumba group from having access to inmates in recent times.

He added that the group had in the past provided clothing, food and paid for external examination fees for inmates.