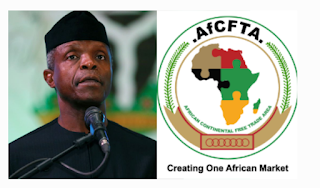 Vice President Yemi Osinbajo says there is a potential income gain of up to $450 billion from the African Continental Free Trade Area (AfCFTA).

“Every smart economic grouping, whether governments or businesses, must be thinking, planning and strategising for these new times. The free trade agreement presents a major opportunity for African countries,” said Mr Osinbajo. “By some estimates, if we get it right, we can bring several millions out of extreme poverty and raise the incomes of 68 million others who live on less than $5.50 per day.”

Speaking further, he stated, “There are potential income gains of up to $450 billion, and just cutting red tape and simplifying customs procedures alone could drive up to $250 billion of that sum.”

Mr Osinbajo also said all that amounted to plenty opportunities  for the insurance industry in Africa, entailing more trade in goods resulting in greater need for insurance services and brokers.

“Demand for trade facilitation services will rise, but obviously companies that already have market presence in other African countries, even if by collaboration, will benefit more than others,” he added. “We can expect to see more well capitalised insurance providers from other African countries coming to compete in the Nigerian market. And we shouldn’t be surprised if this happens quickly.”

The vice president added that “services can be set up faster than manufacturing plants. Nigerian financial services companies, especially banks, are already in many African Countries, the likes of Zenith, Access, UBA.”

“How about Insurance companies? We should now be looking at developing homegrown international African insurance conglomerates; the time is now,” said Mr Osinbajo.

On the issue of climate change, Mr Osinbajo probed on how the African insurance industry prepared for the “interesting” days ahead.