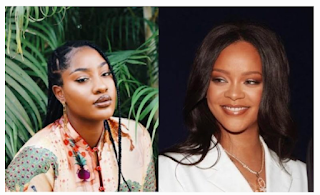 As seen in the viral video posted on Tems Instagram story, the two stars hugged as Rihanna screamed “Oh my God” in excitement.

She then went on to tell Tems to “stop that humble shit” as she went on to gush and advice the starstruck Tems.

Tems has had a successful career after churning out hits upon hits in the Nigerian music scene and has gained an even wider international audience after her feature on Wizkid’s summer anthem “Essence” with a remix with Justin Bieber, topped the Billboard 100 charts.

Tems also recently got featured in Drake’s “Fountain”, one of the tracks off his recently released “Certified Lover Boy” Album.

She has been seen to link up with Adele, and also last year, on December 19, international star Chris Brown via his instastory, commented on the singer’s power vocals, saying, “Tems is so so so fire! OMFG”