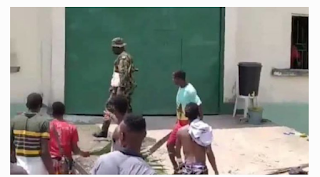 The Nigerian Correctional Service (NCoS) has appealed to Nigerians to assist the prison authorities in rearresting fleeing inmates following a jailbreak at the Kabba facility.

Specifically, the Controller General of the NCoS, Haliru Nababa, ordered the immediate recapture procedure and detailed investigation into the Kogi jailbreak.

The NCoS spokesman Francis Enobore stated this in a statement on Monday in Abuja.

The country’s prisons chief, who personally led a team to assess the situation, explained that the attack occurred at about 11:45 p.m. on Sunday.

The bandits “engaged the armed guards in a fierce gun battle.”

Mr Nababa appealed to the general public to provide useful intelligence to security operatives to recapture the escapees.

Established in 2008, the Kabba MSCC had a capacity for 200 inmates, but at the time of the invasion, 294 inmates were in custody.

Two hundred and twenty-four are pre-trial detainees and 70 convicted inmates.