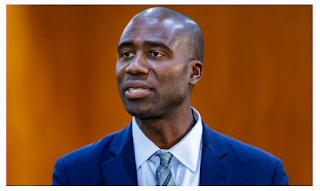 A Nigerian-American, Dr Joseph Ladapo, has been appointed Surgeon-General and Secretary of the Department of Health in the U.S. state of Florida.

Ron DeSantis, Florida Governor, announced the appointment in a statement posted on the Florida Department of Health website, stating that he was pleased to announce Mr Ladapo for the position.

“Ladapo comes to us by way of the David Geffen School of Medicine at UCLA, with a superb background.”

According to him, Mr Ladapo has had both a remarkable academic and medical career with a strong emphasis in health policy research.

The governor said: “Ladapo will bring great leadership to the department of health,” thanking both Dr Scott Rivkees and Dr Shamarial Roberson for their hard work on behalf of all Floridians.

Lieutenant-Governor Jeanette Nuñez described Mr Ladapo as, “an excellent choice to serve as our next surgeon general.

“Ladapo has impeccable credentials and a strong vision to effectively serve the people of Florida at the helm of our public health agency.

“Through his service to our state, we will continue Florida’s work to advance our public health goals,” Mr Nuñez said.

Mr Ladapo said he is honored to have been chosen by Mr DeSantis to serve as Florida’s next surgeon-general.

“We must make health policy decisions rooted in data and not in fear.

“From California, I have observed the different approaches taken by governors across the country and I have been impressed by DeSantis’ leadership and determination,” he said.

The new surgeon-general said he was impressed by Mr DeSantis’ leadership to ensure that Floridians were afforded all opportunities to maintain their health and wellness, while preserving their freedoms as Americans.

“It is a privilege to join his team and serve the people of Florida,” he said.

Mr Ladapo was recently granted a professorship at the University of Florida (UF) College of Medicine.

Prior to joining UF, he served as an associate professor at the David Geffen School of Medicine at the University of California, Los Angeles (UCLA),caring for hospitalised patients.

He is a graduate of Wake Forest University, who also holds an MD from Harvard Medical School and a PhD in Health Policy from Harvard Graduate School of Arts and Sciences.