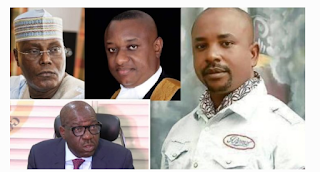 Politicians across parties have sent condolence messages to sympathise with activist and politician Omoyele Sowore over the murder of his brother Jide Sowore, killed on Saturday by suspected Fulani herdsmen in Edo state.

The police said the herdsmen murdered Mr Sowore along the Lagos-Benin expressway and abducted five other persons.

The older Sowore took to his social media page to announce the tragic death of his brother, who was a student of the Igbinedion University in Edo state.

Reacting to the news on Twitter, former vice-president Atiku Abubakar expressed his condolences and condemned the daily killings of Nigerians across the country.

“I just received news of the reported killing of Mr Olajide Sowore, a student of Igbinedion University and the immediate younger brother of human rights activist, @YeleSowore. His death, and indeed the killings and daily abductions of innocent citizens, saddens me,” @atiku tweeted.

“Every death diminishes our humanity. My sincere condolences to the Sowore family and his friends. May his soul rest in peace,” he said.

Edo state governor Godwin Obaseki sent a condolence message to the Sowore family. The governor said an investigation would be done into the murder and the culprits punished by the law.

“I commiserate with the Sowore family and the Publisher of Sahara Reporters, Omoyele Sowore, over the death of his brother, Olajide Sowore.

“The news of Olajide’s death is heartbreaking and we will make all efforts to bring the perpetrators of the dastardly act to justice.

“On behalf of the people and Government of Edo State, I condole with the Sowore family and pray that God will grant all the fortitude to bear the irreparable loss,” Mr Obaseki said.

Minister of State, Labour and Employment Festus Kayemo, while sympathising with the family, vowed that justice would be served in the murder case of the late Sowore.

“It is quite sad and regrettable that such a young man would be cut down in his prime by criminal elements,” Mr Kayemo wrote on Facebook.

According to him, “Myself and other compatriots would be pressurising the law-enforcement agents to track down these killers without delay and bring them to justice.”

Urging Mr Sowore to “take heart and remain committed to helping the nation find a lasting solution to some of these numerous challenges,” the minister said, “This, and many others around the country, must be checkmated with all arsenals at our disposal.”

On his Twitter page, Ben Murray-Bruce asked the appropriate authorities to bring justice to his death.

“My sincere condolences to the Sowore family and loved ones over the death of Mr Olajide Sowere, a student of pharmacy at the Igbinedion University, Edo State.

“I urge the government to spare no resources in bringing his killers to book. May his soul rest in peace,” @benmurraybruce tweeted.

“The perpetrators of this heinous act must face justice. It’s sad that human life is no more sacred nowadays. My condolences to his family.”