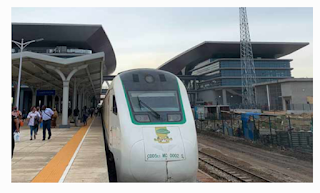 The Nigerian Railway Corporation (NRC) has constructed a 40-bed hotel worth N320 million at its Ebute-Meta station in Lagos.

The Railway Guest House is equipped with a swimming pool, restaurant and meeting hall, among other facilities.

Speaking at the opening on Wednesday, Timothy Zalanga, Managing Director of Railway Property, said the project marked the beginning of a new business strategy for the NRC, focusing on property development rather than leasing of lands.

“This project shows that with the focus of the present regime on Railway Development, many more can be achieved in the overall interest of the general public,” he said.

Mr Zalanga said 60 per cent of the construction cost was funded from replacement costs of some of the NRC structures that were demolished to pave way for the new Lagos – Ibadan standard gauge line to get into Apapa port.

The remaining 40 per cent was funded by Railways Property.

Joseph Odobeatu, Managing Director of Ojez Group, said security within the hotel would be provided by the Nigerian Police Railways Command, private security and an internal security team.