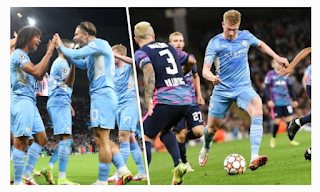 On Wednesday, Manchester City crushed RB Leipzig 6-3 in a thrilling UEFA Champions League Group A game as Christopher Nkunku scored a hat-trick for the German side.

It was a hugely entertaining match at the Etihad Stadium, and Manchester City’s manager, Pep Guardiola, will be happy with the three points for the 2020/2021 season’s runners-up.

However, he will be concerned about the spaces his team left for the German side to exploit on the break.

Nkunku became only the fourth player to score a UEFA Champions League treble and end up on the losing side.

He deserved his player of the match award, though, as RB Leipzig showed real spirit to keep fighting back against Manchester City’s impressive firepower.

Defender Nathan Ake put Manchester City ahead in the 16th minute with a header from a Jack Grealish corner-kick, and the hosts doubled the lead 12 minutes later.

This was when Kevin De Bruyne produced wonderful skill to leave three defenders for dead before his deep cross was headed into his own net by RB Leipzig defender Nordi Mukiele.

RB Leipzig got back in the game with a 42nd-minute header from Nkunku, only for Manchester City to restore their two-goal advantage on the stroke of half-time.

Lukas Klostermann was ruled to have handled after the referee went to the pitchside monitor to check the incident, and Riyad Mahrez blasted home the spot-kick.

Leipzig were not deterred, though, and Nkunku reduced the deficit again in the 51st minute by heading in a cross from the excellent Spanish midfielder Dani Olmo.

He collected the ball on the left flank and jinked inside before giving Peter Gulacsi no chance with a curling shot into the far corner.

But, once again, French forward Nkunku kept the game alive, completing his hat-trick with a crisp drive after being set up by Yussuf Poulsen.

Substitute Gabriel Jesus added the sixth from close range five minutes from time, and the home crowd were delighted with the display of Grealish in front of his England manager Gareth Southgate.