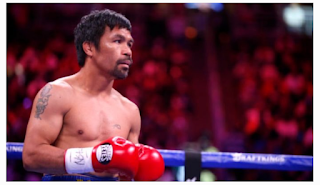 Phillippines boxing legend Manny Pacquiao has announced his retirement from boxing to run for president in the Philippines.

Making the announcement on Facebook and Twitter on Wednesday, Mr Pacquiao, a serving Philippines senator, said it was difficult to accept that his time as a boxer was over.

“As I hang up my boxing gloves, I would like to thank the whole world, especially the Filipino people, for supporting Manny Pacquiao. Goodbye boxing,” said the 42-year-old said in a video posted on social media. “It is difficult for me to accept that my time as a boxer is over. Today, I am announcing my retirement.”

His retirement followed his defeat at the hands of young Cuban boxer Yordenis Ugas in Paradise, Nevada, on August 21.

Earlier in the month, the legendry boxer hinted of his retirement from boxing after he accepted his political party’s nomination to run for the 2022 presidential election in the Philippines.