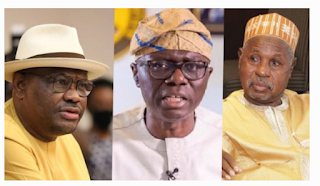 Governor Aminu Masari says Katsina is appealing against a recent ruling by the Rivers Division of the Federal High Court, which held that the Rivers government should take charge of collecting value-added tax (VAT) in the state instead of the federal government.

Mr Masari described the judgment as “unfair” while a delegation from the Revenue Mobilisation and Fiscal Commission (RMAFC) paid him a sensitisation visit at the Government House on August 31.

“We have heard the judgment of the State High Court in Rivers, and we have appealed against that judgment,” said the governor.

The court had, on August 9, issued an order restraining the Federal Inland Revenue Service (FIRS) from collecting VAT and Personal Income Tax (PIT) in Rivers after the state government filed a case against the agency and the attorney general of the federation over illegalities.

Mr Wike’s administration, while citing a section of the 1999 constitution, sought that the power to collect taxes be exercised by the state government.

In its judgment, the court, presided by Justice Stephen Pam, noted that the Rivers government and not FIRS was authorised to collect VAT.

Meanwhile, Lagos has announced that it had begun collecting VAT in the state.

Days after the court ruling, Mr Wike signed into law the bill on VAT collection in the state, noting that the court addressed the illegalities perpetrated by the FIRS on behalf of the federal government.

He stressed that “states have been turned to beggars, hardly will any day pass that you will not see one state or others going to Abuja to beg for one fund.”

But this did not sit well with Mr Masari, who said it would not be implemented in Katsina, just as he argued that it would trigger a burden on people.

“It means people will begin to pay double VAT because if you pay VAT in Kano at the point of departure when you come to Katsina, you will pay another VAT,” the Katsina governor reasoned. “If you pay VAT in Lagos, it means you will also pay VAT all along the way until you reach your destination. It will bring a lot of burden on the people. That judgment is not fair.”

He further claimed that “it is other parts of the country that make Lagos and Rivers states what they are.”

Sounding conciliatory, he added, “We have to work together as a nation and come up with something that will work for all of us.”

Mr Masari also faulted the revenue sharing formula between the federal, state, and local government, describing it as “lopsided and stagnant” and called for its review.