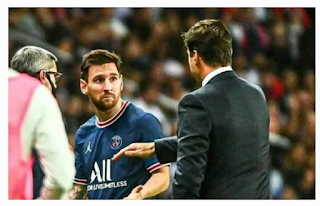 Paris Saint-Germain were able to scrape a 2-1 win against Lyon in a French Ligue 1 game on Sunday night but the wait for Messi’s first goal with the Parisians continues.

The talismanic Argentine star could not open his goalscoring account for PSG on the night despite tries.

After a goalless first half, Lyon took the lead in the 52nd minute at Parc des Princes, PSG’s home turf, courtesy of a goal from Lucas Paqueta.

PSG, however, bounced back as Brazilian star Neymar Jnr leveled up for the French champions from the spot in the 65th minute.

The wait for Messi’s first goal for PSG was extended as he was substituted with Achraf Hakimi in the 75th minute. The former Barcelona star who joined PSG this season is yet to score.

It appears Sunday’s game would end in a draw until Mauro Icardi netted a winner for PSG with a 94th-minute header.

PSG have won all their games so far thus season. They are first on the French League table with 18 points in 6 games.