My breasts get me the most attention —Opeyemi Adetunji 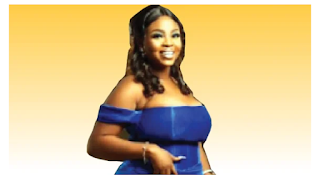 My childhood was fun and filled with love. I was born and brought up in Lagos but we later moved to Ile Ife, Osun State, when I was a teenager. I shuttled between Lagos and Ile-Ife while growing up.

For my elementary education, I attended Rita Nursery and Primary School (Ojodu), and All-Stars Nursery and Primary School, both in Lagos. From there, I proceeded to Omole Junior Secondary School, Lagos. I went on to complete my secondary education at Ambassadors College, Ile Ife, Osun State. I then proceeded to Adeyemi College of Education Ondo State, where I studied Social Studies and bagged a National Certificate in Education. I later attended Obafemi Awolowo University (Ace Chapter, Ondo State), where I studied Guidance and Counselling.

My passion for acting was ignited when I watched Sola Sobowale’s film, Ohun Oko S’omida’. I was wowed by her performance in the movie. As time went on, whenever my friends asked me in school why I wasn’t an actress, I always told them I was considering it. That was how my acting journey began.

I did not tell my parents about my flair for acting when I started out. It was later my mother got to know but she did not say anything. Later on, my dad got to know about it too and he told me about the perception people had of actors and actresses. He told me to be careful and that was it.

I have learnt a lot of lessons in the course of my career. One of the most important lessons I have learnt is to never depend on any human. I have also learnt to work hard, put God first and pray.

When I first got into the industry, I thought that after learning the craft, I would just start getting featured in movies and making money. But, it things did not turn out that way. I faced a lot of challenges. I had to prove myself, letting people know that I am a talented actress.

Getting funds was another major challenge. If one does not have money, one would find it hard integrating into the industry because one would have to go to locations, feed oneself, and take care of one’s accommodation. It wasn’t easy at all.

I consider the storyline of a movie before deciding to feature in it. The storyline has to make sense and have a great message. When I am called for a job, the first questions I ask are about the role I would be playing, and the storyline, to know if it is something I can actually do. Money is not the most important thing to me.

I look forward to playing several diverse roles. I have not really explored all I can do as an actress. I still have many sides that are untapped.

In terms of the industry being lucrative, it has not been bad. However, I am speaking from my own experience. It has not been as (good) as I hoped, but not so bad either.

My greatest fear is that of failure. I don’t want to fail.

Sexual harassment is everywhere. It is the way one carries oneself, where one goes and some other factors that would determine if one would be a victim. Also, if one is desperate for fame, people would make sexual advances at one. I have actually experienced it.

I don’t think love is enough to sustain a relationship. Trust is also important for a relationship to work. Both partners have to communicate well too. In addition, being friends with whoever one is in love with would go a long way. Friendship is one major factor that would make a relationship work

However, love is a beautiful thing. I believe that everyone, at one time or the other, must have done a weird thing for love. But, I cannot remember any of such personal experiences.