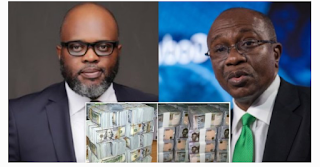 There are at least 10,000 bureaux de change in Nigeria while the UK and the UAE have a combined 275 BDCs, says Nigerian economist Tope Fasua.

“This particular one is a speculative attack ignited by the policy of the CBN to stop the sale of forex to about 10,000-odd BDCs. Here, everyone has a BDC licence. Some have multiple licences,” said Mr Fasua while speaking with NAN on the recent depreciation of the naira. “That itself is a world record number when compared to places like the United Kingdom where they have 145 BDCs, United Arab Emirates, 130 and New York, 40. We should support CBN to stop the idea of people carrying dollars around as if it is a mark of prosperity.”

He blamed corruption, inefficiency, low productivity, and lack of patriotism for the unending depreciation of the naira.

“What is happening to the naira is that all of us are having to pay for sins of the past. (The) sins of corruption, inefficiency, low productivity. The fact is that Nigerians are not patriotic,” Mr Fasua, the Chief Executive Officer of Global Analytics Consulting Limited, said on Wednesday.

He noted that it was worrisome that despite measures taken by the Central Bank of Nigeria (CBN) to strengthen the naira, the currency keeps depreciating.

The economist further explained that the CBN had the right to regulate the sale of forex, adding that the apex bank should be commended for playing that role effectively.

He called for an adequate supply of foreign exchange for official and legal transactions to make the forex black market irrelevant.

Also, a financial expert, Mr Okechukwu Unegbu, said the continuous depreciation of the naira implied that steps so far taken by the CBN to strengthen the currency had not worked.

Mr Unegbu, a former president of the Chartered Institute of Bankers of Nigeria (CIBN), suggested that importers from China should be allowed to exchange naira for yuan, the Chinese currency.

“One of the things that would have helped is having the Naira exchange for the Chinese Yuan for imports from China. We do not need to pay for goods from China in dollars,” he stated. “With N500, one can get a square meal in Nigeria. But with one dollar, you cannot get anything in America. This is an indication that the naira has been abused and undervalued. The CBN will need to come up with innovative policies to strengthen the naira.”