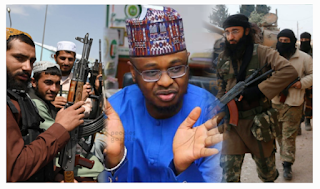 A minister in President Muhammadu Buhari’s regime, Isa Pantami, had once expressed avowed support for Taliban and the Al-Qaeda, and has failed to renounce or denounce the Islamist groups.

Mr Monguno stated this at a roundtable on the crisis situation in Afghanistan and its implications for Nigeria and Africa.

He added that the roundtable would provide opportunity for subject matter experts, intellectuals and security stakeholders to discuss the situation in Afghanistan and its implications on the nation’s national security.

Mr Monguno noted that the fall of elected Afghan government supported by the U.S. government for decades also raised issues of security concern across the world.

According to him, foremost among the issue is the possibility of the Talibans to once again turn Afghanistan into a haven of terrorists as the group is believed to still maintained close tie with Al-Qaeda and its affiliates or sympathisers.

Mr Monguno also explained that the development in Afghanistan had once again highlighted the importance of leveraging non-kinetic approaches to promote nation building to complement kinetic security operations.

Meanwhile, the Minister of Defence, retired Maj.-Gen. Bashir Magashi, says all hands must be on deck to harness the rich intellectual and professional potential among security agencies to secure the country from insurgency.

According to him, with the proliferation of terrorist groups in Africa, especially around the Sahel region, Nigerians have every cause to express concern over the events in Afghanistan.

He also noted that such worries might not be out of place based on the activities of terrorists and insurgent groups such as the Boko Haram and the Islamic State West Africa Province operating in parts of the country along with other criminal elements for some years.

Mr Magashi pointed out that despite of the commendable efforts of the gallant troops of the nation’s armed forces in the ongoing fight and living up to expectations, the country must not rest on its laurels.

The minister commended the initiative taken by the association to critically analyse the situation in Afghanistan with a view to derive lessons for Nigeria and Africa.

“This implies that whatever is happening in any part of the world, in one way or the other, could impact on others positively or negatively. It is on this premise that the issue of terrorism, insurgency, banditry and kidnapping, among other vices currently confronting Nigeria, must be looked at holistically,” said the minister.

He mentioned that this is to identify their root causes, trends, support bases and finding appropriate and sustainable solutions to them.