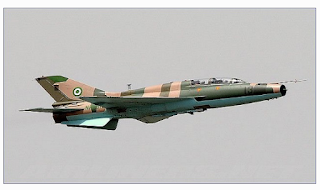 A fighter jet operated by the Nigerian Air Force has mistakenly dropped a bomb on a Nigerian community in the Lake Chad region, the AFP reported on Tuesday in yet another costly glitch with military strike precisions.

At least 20 people, said to be fishermen, were killed in the airstrike that occurred on Sunday in Kwatar Daban Masara, the French newswire reported on Tuesday morning saying information about the tragedy had been slow to circulate due to obsolete communications infrastructure in the area.

Locals said the community was about 50 kilometres from Borno capital and Boko Haram heartland Maiduguri.

The attack came barely two weeks after the Nigerian military bombed a community in Yobe, also in Nigeria’s war-ravaged North-East, killing at least 12 people and wounding many.

The Nigerian Air Force initially denied the report that it dropped a bomb on Buwari village as false, but later owned up and promised an investigation after Governor Mai Mala Buni publicly acknowledged the incident and commiserated with victims.

A spokesman for the Nigerian Air Force did not immediately return a request seeking comments from Peoples Gazette about the attack on Tuesday morning.

The Nigerian military has been conducting air raids across the region since 2009 when Boko Haram insurgents launched attacks against the state. In 2017, an air force pilot dropped a bomb on a village in Rann, Borno, killing dozens of civilians.

The military apologised and promised a thorough investigation but did not make its findings public four years on.