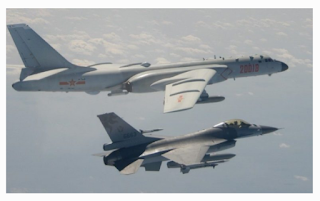 According to Reuters, there was no immediate comment from China.

According to a map provided by Taiwan’s defence ministry, the Chinese fighter jets “flew in an area closer to the Chinese than the Taiwanese coast.”

The country has been railing against China’s military activities close to its airspace for over a year, around its Pratas Islands.

Following the incursion of the Chines aircraft into its airspace, Taiwan dispatched its combat aircraft and deployed its missile systems to monitor Chinese fighter jets.

Reuters reported that China often mounted “such missions to express displeasure at something Taiwan has done or at shows of international support for the democratically ruled island, especially by the United States, Taiwan’s main arms provider.”

Taiwan’s defence ministry raised the alarm last week that China’s threat was growing and could “paralyse” its defences.