One in four Lagos girls sexually abused before turning 18: Govt - The Naija Weekly

One in four Lagos girls sexually abused before turning 18: Govt 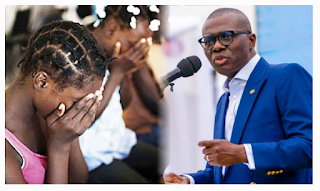 Lagos Commissioner for Justice Moyosore Onigbanjo says one out of four girls will be abused in Lagos before they turn 18.

The DSVRT chairman also stated that due to the findings, the team had included ‘Safeguarding and Child Protection Day’ as one of the ‘Lagos State Domestic and Sexual Violence Awareness Month activities in September.

He explained that since 2015, the DSVRT had commemorated Domestic and Sexual Violence Awareness Month.

Mr Onigbanjo further noted that systems were in place to ensure that the state’s response to sexual and gender-based violence was well structured and service delivery was fully optimal.