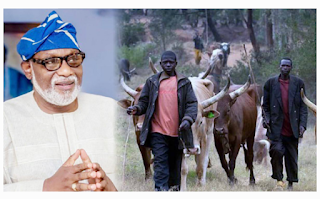 The Ondo government says it has trained 150 herdsmen on the benefits of the feedlot operational system in the state.

Governor Rotimi Akeredolu said this on Friday at the closing ceremony of the second phase of the five-day training programme for pastoralists in Akure.

The training was organised by the Ondo State Agribusiness Empowerment Centre (OSAEC) in collaboration with the Food and Agriculture Organisation (FAO).

Mr Akeredolu, who was represented by the Head of Service, John Adeyemo, said the future of Nigeria depended on agriculture.

He urged participants to think more about opportunities that abound in the entire value chain of agriculture, saying the training was geared toward creating jobs, ensuring food security, promoting peaceful coexistence among inhabitants and ending farmers/herders’ crises.

“It is an indisputable fact that the culture of moving large herds of cattle from one part of the country to the other is archaic and has in recent years been enormously unbeneficial.

“It has become a threat to national security, cohesion and food security.

“Way forward, it is with a sense of pride that I say my administration thought it expedient to revamp and reintroduce ranching with the support and collaboration with FAO of the World Health Organisation.

“Feedlot Operational System is a variant of ranching, where our livestock is being confined to militate against the myriads of problems associated with open grazing of cattle,” he said.

Earlier, OSAEC Chairman, Akin Olotu, urged the participants to adopt and practice the feedlot system of rearing animals to improve productivity and profit for the farmer.

“You will agree with me that open grazing has become problematic in the country, and people are complaining.

“Herders are Nigerians, they can move around, and farmers are equally Nigerians entitled to farm, and we have to put an end to the conflicts.

“We have discovered that is the way out, and we noticed that these people are not being trained or being exposed to modern ways of doing it.

“We expect the Miyetti Allah national association to champion a cause like this across the country.

“This is why we are working with them in the state; they are not our enemies; we are friends. This is the method of doing it, and we are partnering FAO with different languages,” he said.

Ondo State Secretary of Miyetti Allah Cattle Breeders Association, Ahmed Danna, described the training as a welcome development for the association. He said with technology, meat production and profitability would increase.