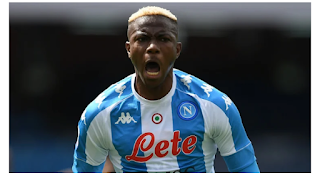 Victor Osimhen scored his third Europa League goal of the season for Napoli, who suffered a 3-2 loss to Spartak Moscow in an ill-tempered game that saw nine yellow cards and two red cards issued at the Stadio Diego Armando Maradona on Thursday.

The Nigerian had scored a brace for the Partenopei in their 2-2 draw with Leicester City a fortnight ago.

Osimhen came on for Andrea Petagna at the start of the second half and reduced the deficit in additional time of the defeat when he tapped in Di Lorenzo squared ball from the right for his seventh goal of the season.

The goal sees the former Lille striker surpass the goals scored by Edinson Cavani and Dries Mertens in seven consecutive games for Napoli.

Wilfred Ndidi and Kelechi Iheanacho were missing in action as Leicester’s winless start to their Europa League campaign continued with a 1-0 defeat at Legia Warsaw, who collected a famous victory in Poland.

Brendan Rodgers’ side have started the season inconsistently and now have work to do in Group C following their 2-2 draw at Napoli on matchday one.

Mahir Emreli scored the only goal in the 31st minute, outmuscling Daniel Amartey on the edge of the box before firing in a low finish via the foot of the post.

It was the Gers second loss following their matchday one – a 2-0 defeat to Lyon.

David Hancko’s first-half header secured all three points for Sparta Prague who are now second with four points from their opening two games. Rangers are left rooted to the bottom of group A following successive defeat.

John Lundstram replaced Aribo in the 77th minute of the defeat while Balogun and Bassey played the entire duration of the game.

Henry Onyekuru played for 63 minutes in Olympiacos’ 3-0 win away at Fenerbahce.

The Nigerian forward who was left out of the Eagles World Cup qualifiers against Central Africa Republic next week was replaced by Pierre Kunde.

In the Europa Conference League, Oladoye Adewale was handed a cameo appearance in Gent’s 2-0 home win over Anorthosis. The Nigerian teenager replaced Elisha Owusu in the 84th minute.

Gent are second on six points in Group behind Partizan Belgrade on the same points with a superior goal difference.