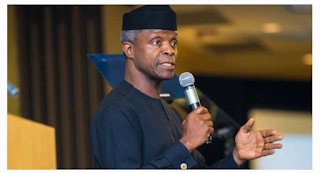 The regime of President Muhammadu Buhari has urged the press to support it in silencing secessionist agitators pushing for Nigeria’s breakup.

Vice President Yemi Osinbajo made this appeal on Monday while hosting the Nigerian Union of Journalists (NUJ), led by its President, Chris Isiguzo, in the Presidential Villa.

He said the press should “moderate the kinds of views that we hear constantly; which in the end, (if care is not taken) subverts the polity.”

In a statement by his spokesperson, Laolu Akande, the vice president boasted that while the poor masses will suffer, the elites in the country will survive a possible breakup of Nigeria.

“If this country breaks up in any way or becomes the subject of what some people would like it to be, all of us will lose out. The elite will survive in any way, but the vast majority of our people will not,” Mr Osinbajo said.

He said Nigerians cannot afford a situation where the “country is made the theatre of conflict and all sorts of insurgencies and crimes.”

Mr Osinbajo further urged the media to collaborate with the government to prevent secessionist agitators from gaining the upper hand against the regime.

He called on the press to work with the Buhari regime to protect the information space so that “people who want to subvert the republic are not allowed to do so.”