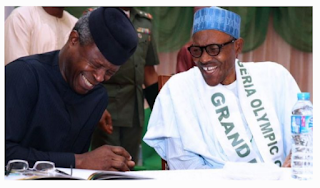 In addition, Mr Osinbajo also stated that he did not agree with claims that the amalgamation of the northern and southern protectorates was responsible for Nigeria’s woes.

“Indeed, it is my view that the colonial beginnings of African nation-states do not constitute the sort of immutable obstacle to nation-building that it is made out to be,” the vice president argued. “In any case, there is a lot of scholarship and research that shows that our ethnic nations share a long history of trade, diplomacy, migration, and conflict – all of which ensured that by the time the colonialists arrived, we were not strangers to each other.”

He insisted that the external reasons Nigerians cited as reasons for problems could not thrive without severe internal weaknesses in the society, stressing that the chief weakness is a human one: the elite, the political, economic, and religious elite.

“An elite that has so far proved to be socially irresponsible; one which either by selfishness, negligence or ignorance or a lack of self-awareness has so far been unable to build the institutions and more importantly, the social and political consensus upon which a just and orderly society can stand,” said Mr Osinbajo.

He urged the elite to contribute to fostering national unity, stability and creating opportunities for Nigerians.

Mr Osinbajo made this call in a keynote address at the ‘2020 Leadership Conference and Awards’ in Abuja by the Leadership Newspapers.

The vice president noted that the event came against the backdrop of economic adversity, inflamed fault lines and social resentments.

He said in light of all the challenges, the conference’ theme, ‘National and Regional Insecurity: The Role of Political and Non-Political Actors in Stabilisation and Consensus Building’, was an inspired one.

“In considering the theme of this event, it is worth noting that often when we explore the concepts of national and regional security, there is a tendency to anchor the discourse around the machinations and intrigues of externally-generated vulnerabilities, external adversaries,” Mr Osinbajo further explained. “So, we argue that the problem of state fragility in Africa is on account of the colonial origins of her nation-states, the notion that Nigeria is a hastily and arbitrarily cobbled together patchwork of mutually alienated kingdoms and as a result, has remained plagued by fundamental challenges rooted in its founding is popular, but not the whole truth.”