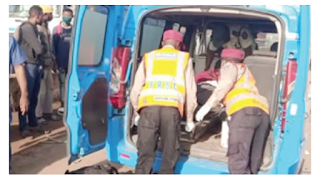 Thirteen persons have been feared dead in a fatal road crash on the Akpoku-Udufor Road in the Etche Local Government Area of Rivers State.

The state police command, while confirming the incident, said it had launched an investigation into the circumstances leading to the crash.

PUNCH Metro gathered that a bus filled with passengers and a truck had a head-on collision, though it was not established which of the drivers was at fault.

Our correspondent learnt that the bus occupants were from Etche and travelling to Imo State for the traditional marriage of one of their sons around 3pm when the incident occurred.

A source from the area, who gave his name as Chibuike, said the crash was caused by speeding, adding that when both vehicles collided, the bus somersaulted several times.

The source also revealed that 11 people died on the spot, adding that two others died while being taken to a hospital.

The state Police Public Relations Officer, Nnamdi Omoni, confirmed the incident to our correspondent on Monday, but said five copses were recovered.

“Yes, I am aware of it. We are still investigating the incident. But five bodies were recovered from the scene and deposited in a hospital mortuary.

“Some persons with injuries were taken to the hospital. I don’t know if there were more deaths,” Omoni stated.