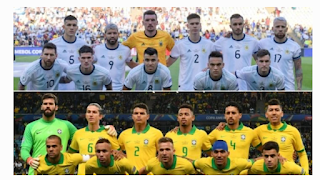 he 2022 FIFA World Cup qualifier between Brazil and Argentina in Sao Paulo has been suspended due to a breach of Brazilian COVID-19 restriction rules.

On Sunday, in extraordinary scenes, health officials entered the pitch early in the game to object to the participation of three Argentinian players who had allegedly broken the coronavirus travel rules.

They did so by providing false information in the entry form, according to Antonio Barra Torres, the president of the Brazilian health regulatory agency Anvisa.

“By decision of the referee, the match between Brazil and Argentina at the World Cup qualifiers organised by FIFA is suspended,” South American ruling body CONMEBOL said, adding that world governing body FIFA would decide what should be the next step.

“Four people entered (the pitch) to interrupt the game with a notification, and CONMEBOL asked the players to go to the locker room,” he explained.

Anvisa had previously asked the federal police to send away Emiliano Martinez, Emiliano Buendia, Cristian Romero, and Giovani Lo Celso due to the breach of the COVID-19 regulations.

However, just before the match, the AFA and the Brazilian government reached an agreement, and the players were allowed to participate in the game.