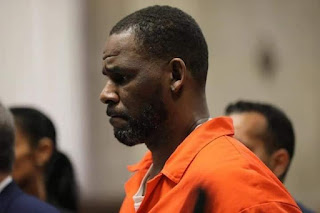 The singer was found guilty Monday on one count of racketeering and eight counts of violating the Mann Act.

R. Kelly has long been trailed by troubling accusations of sexual misconduct and abuse, even as he climbed the Billboard charts and earned Grammys for his R&B music.

Kelly, whose real name is Robert Sylvester Kelly, has repeatedly and vehemently denied any wrongdoing.

The decades of rumors and allegations culminated this year with a high-profile federal sex-trafficking trial in New York, where Kelly was found guilty on Monday on all counts. He pleaded not guilty in the case.

Here’s an abridged timeline of the key events that led to this moment:

November 1993: Kelly, a Chicago native who discovered his passion for music as a teenager, breaks into the national consciousness with the release of his debut studio album “12 Play,” anchored by the hit singles “Sex Me” and “Bump N’ Grind.”

Aug. 31, 1994: At 27, Kelly illegally marries 15-year-old singer Aaliyah, in a secret ceremony. The marriage is annulled months later because Aaliyah was underage. (She died in a plane crash in August 2001, when she was 22.)

November 1996: “I Believe I Can Fly,” released on the soundtrack for the movie “Space Jam,” peaks at No. 2 on the Billboard Pop Chart. The song goes on to become a classic of the R&B genre.

The same year, Kelly marries Andrea Lee, 22, a dancer from his touring company. They go on to have three children: Joanne, Jaya and Robert Jr.

December 1996: Tiffany Hawkins, a high school student and aspiring singer, sues Kelly for $10 million and alleges they began having sex in 1991, when he was 24 and she was 15, according to a Chicago Sun-Times article published in 2000.

January 1998: Hawkins’ lawsuit is settled for $250,000 and Kelly denies any wrongdoing, according to the Chicago Sun-Times article. The next month, Kelly wins three Grammy Awards for “I Believe I Can Fly.”

Dec. 21, 2000: The Chicago Sun-Times, citing court records and interviews, reports that Kelly “used his position of fame and influence as a pop superstar to meet girls as young as 15 and have sex with them.”

August 2001: Tracy Sampson, who interned at Epic Records when she was a teenager, files a lawsuit against Kelly, alleging their sexual contact was illegal under Illinois law because he was in a “position of authority” over her.

The lawsuit was settled in 2002 for $250,000, Sampson has said. Kelly's attorney told NBC News in 2019 that he did not represent the artist when Sampson alleges she was abused, but he was adamant that his client has done nothing wrong.

The same day the Sun-Times article is published, Kelly performs at the opening ceremonies of the Winter Olympics in Salt Lake City.

June 5, 2002: Kelly is indicted in Chicago on child pornography charges related to the sex tape that was received by the Sun-Times. He later pleads not guilty and he is released on $750,000 bail.

September 2005: Andrea Kelly requests an order of protection from her husband, accusing him of striking her when she told him she wanted a divorce.

“My wife and I had a heated argument, and we are now in the process of working it out,” Kelly said in a public statement at the time. “We hope that the press and public will give us the time and privacy we need to resolve this very personal situation.”

May 9, 2008: Kelly’s child pornography trial begins, more than five years after he was indicted.

June 13, 2008: Kelly is acquitted on all counts in the child pornography case after the jury deliberates for less than a full day.

January 2009: The singer and his former wife, Andrea, confirm they are divorced.

July 17, 2017: DeRogatis, who had doggedly reported on Kelly for years, publishes an exposé for BuzzFeed News called “Inside the Pied Piper of R&B’s ‘Cult.’” The article details claims from parents who say Kelly brainwashed their daughters and kept them in an abusive “cult.”

Oct. 5, 2017: The New York Times publishes the first of its investigations of movie producer Harvey Weinstein. The article helps inspire a wider reckoning with sexual harassment and assault in entertainment and other industries.

April 2018: The victims’ advocacy group Time’s Up and others associated with the broader #MeToo movement call for deeper investigation into Kelly’s alleged behavior.

In response, Kelly’s representatives say: “We will vigorously resist this attempted public lynching of a Black man who has made extraordinary contributions to our culture.”

May 10, 2018: Spotify, the biggest streaming music service in America, removes R. Kelly's music from its playlists as part of a new hate content and hateful conduct policy. Apple and Pandora announce shortly after that they will stop promoting his songs.

The same month, 20-year-old Faith Rodgers files a lawsuit accusing Kelly of sexual battery, mental and verbal abuse, and knowingly giving her herpes. (The singer's representatives decline to comment to NBC News after Rodgers appears at a Jan. 2019 news conference, but his lawyers continue to insist their client has done nothing wrong.)

Jan. 3, 2019: The cable channel Lifetime premieres “Surviving R. Kelly,” a documentary series that chronicles the allegations against the singer and features interviews with several of his accusers. The documentary puts the singer’s behavior in the national spotlight again.

Feb. 22, 2019: Kelly is arrested and charged in Chicago with 10 counts of aggravated sexual abuse. Kelly’s attorney later enters not guilty pleas, and the singer is released from jail on bail.

March 6, 2019: In an interview with Gayle King of CBS News, Kelly forcefully denies the sexual abuse charges against him. “I didn’t do this stuff,” he said. “This is not me. I’m fighting for my f---ing life.”

July 11, 2019: Kelly is indicted by a federal grand jury in Chicago on 13 counts, including child pornography, enticement of a minor and obstruction of justice.

In a separate indictment announced the same day, federal prosecutors in New York charge Kelly with one count of racketeering and eight counts of violating the Mann Act, a law that bars transporting anybody across state lines for prostitution.

He is arrested in Chicago while walking his dog.

Aug. 5, 2019: He is charged in Minnesota with prostitution and solicitation — counts related to an allegation that he invited a teenage girl to a hotel room in 2001 and paid her $200 to dance naked with him.

In response to a request for comment, Kelly's lawyer Steve Greenberg says: “Frankly, I’m not sure I could say anything without swearing.” He called the charges "an abuse of process, prosecutorial discretion and a perversion of the statute of limitations."

March 5, 2020: The singer pleads not guilty in Chicago to an updated federal indictment that includes child pornography charges and allegations pertaining to a new accuser.

August 2021: Kelly’s sex-trafficking trial begins after Covid-related postponements. The prosecutors present the singer as a serial sexual predator while his defense lawyers describe his accusers as “groupies” who tried to take advantage of his fame and exploit the #MeToo movement.

Sept. 27, 2021: Kelly is found guilty in New York of one count of racketeering and eight counts of violating the Mann Act, a law bars the transport of people across state lines “for any immoral purpose