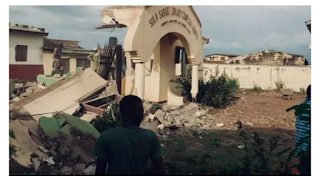 The demolition of a community library named after Kwara political giant, late Dr Olusola Saraki in the Agbooba/Kuntu area of the Ilorin West local Government area of Kwara State by officials of government on Tuesday has generated tension among residents of the state.

The Ilorin West LGA officials, however, claimed responsibility for the demolition of the over 20 year old library named after the former Senate Leader.

It was gathered that around 4pm on Tuesday, some officials of the government from Ilorin West LGA moved to the site of the library and demolished the building.

Efforts to speak with the Chairman, Transitional Implementation Committee, Ilorin West LGA, Alhaji Abdulgafar Toso, proved abortive as all calls to his number did not connect.

However, in a statement by the Chief Press Secretary to the Governor, Rafiu Ajakaye, the government said,   “The facility is dilapidated and was serving as hideouts for some anti-social elements with consequences for public safety.

“The community appealed to the LGA authorities to do something about it. The LGA has moved in to remove parts of it preparatory to rehabilitating the facility by adding an ICT centre for public use. After its reconstruction, it should retain the honorary name of Baba Saraki.”

But, the scion of Saraki family and former Senate President, Dr Bukola Saraki, in his reaction said, “I just got the news that the major official assignment carried out by the governor of my state, Kwara, today is the demolition of an old public library named after my late dad, Dr Olusola Saraki.

“May Almighty Allah continue to retain a place for Oloye in Aljannah Firdaus.”

Also in her reaction, the Minister of State Transportation, Senator Gbemisola Saraki,  said, “Today, we find that the governor of Kwara State’s focus is not on building up Kwara, but on demolishing buildings which were owned or named after my late father, the Waziri of Ilorin.

“No matter how many structures are demolished, Baba Saraki’s legacy can never be destroyed, because it lives in the hearts and minds of the great people of Kwara.”