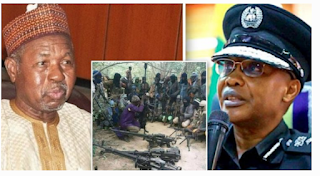 The police command in Katsina says it has arrested six persons for supplying petrol and bread to bandits.

The police spokesperson, Gambo Isah, disclosed this in a statement on Tuesday.

According to the police, a 57-year-old man from Kofar Guga Quarters conveying fuel in his vehicle was also nabbed.

“Nemesis caught up with the suspects when they were all arrested along Katsina-Jibia road while on their way into the forest,” said the statement.

The police further stated that the suspects confessed to selling the fuel on the fringes of the forest, contrary to the “executive order and other extant laws of the federation.”

The statement added that the command also arrested a 25-year-old suspect from Anguwan Nakaba, Sabuwa LGA, believed to be a fuel supplier to bandits in the forest.

“The fact of the matter was that the suspect was observed to have been frequently coming to buy fuel at a filling station in Dandume LGA in his motorcycle, a Jincheng rubber,” said the police. “Consequently, police detectives on surveillance patrol at the said filling station secretly followed him, which led them into an uncompleted building where he was arrested while transferring the fuel into a jerrycan.”

The command noted that the suspect confessed to selling petrol to bandits.

It also arrested a 30-year-old man from Sabon Garin MotsoMotso, Zandam, Jibia LGA, suspected to be a notorious informer specialised in supplying bread to bandits in the forest.

In a related development, the police spokesman also disclosed that the command had arrested a 22-year-old man from Kankia LGA, a cripple, who specialises in calling people on the phone and threatening them to pay ransom or risk being kidnapped.