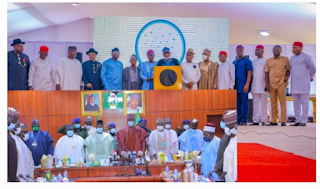 Governor Abdullahi Sule says northerners will resist southerners’ attempt to force VAT collection by states and 2023 presidency on them.

“The presidency of Nigeria is for people to lobby (for it). You can campaign for it, Mr Sule said Monday on Channels TV. “It is a free world. People can say whatever they want to say. But for people like us, you cannot shove it down our throats, that you must (produce the next president). You must what? It doesn’t work that way.”

The governor asserted that it was not a must that the southern region produce the next president come 2023.

Asked if he agreed with southern governors who in a communique issued after a meeting in July said their region must produce the next president, Mr Sule said, “There are a lot of southerners who have the capacity to make this country work well. But even those kinds of people you don’t say they must. If they don’t, what next? VAT? Resource control? This and that.”

He added, “Is that it? You cannot tell anybody they must. That is what I’m concerned about. How about if it doesn’t, because it is possible, it may not.”

Over the weekend, the Northern Elders’ Forum spokesman, Hakeem Baba-Ahmed, said the North had the numerical strength to dominate Nigeria. He asserted that the heavens would not fall if a northerner emerged as the next president in 2023.

“We will surprise them in 2023 because we will vote for who we want, including the northerners, and nothing will happen. If we choose to vote for a northerner, the heavens will not fall,” Mr Baba-Ahmed had said at the inaugural edition of the Maitama Sule Leadership Lecture Series. “We will choose who we want in this country.”