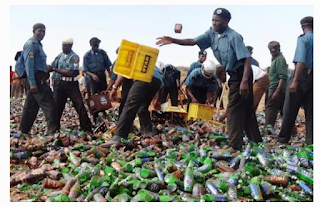 States that have a penchant for destroying alcoholic beverages can no longer enjoy the dividends of Rivers state Value Added Tax (VAT), governor Nyesom Wike has said.

Speaking during a statewide broadcast after the Federal Inland Revenue Service (FIRS) failure to secure a stay-of-execution to stop Rivers from collecting VAT from businesses in the state, Mr Wike hinted his victory would affect states’ with low revenue.

Rivers State had the second-highest Internally Generated Revenue (IGR) in 2020, according to a report obtained from the National Bureau of Statistics (NBS).

Mr Wike threw a subtle jab at northern states whose insistence to be governed by Sharia law has witnessed the loss of millions from the destruction of alcoholic beverages, while these states partake in VAT from alcohol consumption from other states.

He said he was aware that the Rivers state government decision to collect VAT would lead to setbacks for some of these Sharia-compliant states.

Over the years, the Hisbah police (enforcers of Sharia law) has continued to destroy millions of bottles and cans of alcoholic drinks considered a sin in Islam.

In an interview with Punch, Kano-based distributor of alcoholic drinks, John Simon, lamented how he lost over N35 million to the Hisbah police after they destroyed thousands of his alcoholic drinks in November last year.