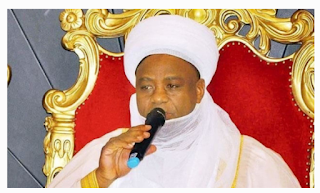 Northern states have been asked by the Sultan of Sokoto, Muhammed Abubakar III, to adopt the Violence Against Persons Prohibition Act (VAPP) and Child Rights Act to end gender-based violence against the girl-child.

Mr Abubakar made the call at the end of a two-day meeting consisting of the Minister of Women Affairs, Pauline Tallen, northern traditional and religious leaders and himself, under the Sultan Foundation for Peace and Development.

Commending traditional and religious leaders for their roles in ending polio, Mr Abubakar said as custodians of customs and values, it was their responsibility to come up with solutions to “all forms of harmful practices associated with GBV.”

He called on the federal government to set up at least one gender-based violence resettlement centre in each of the geo-political zones.

In a statement through her ministry’s press director, Olujimi Oyetomi, in Abuja, Mrs Tallen was quoted as saying ”GBV will be drastically reduced if traditional and religious leaders are engaged in high-level action.”

The minister “urged traditional and religious leaders to ensure that the Child Rights Act was domesticated in the 10 remaining states, which are basically the Northern states.”

In a message to the meeting, the UN Deputy Secretary General, Hajia Amina Muhammed, said one in every three women had experienced gender-based violence in their lifetime.

UNFPA Representative in Nigeria, Ulla Muella, advocated for education of the girl-child and a medium that allowed women and girls to make decisions pertaining to their bodies.

Also speaking, chairperson, Northern Governors Wives Forum, Hadiza El-rufai, appealed to religious and traditional rulers to balance their message to their subjects, saying when cautioning women to cover up, men should also be asked to lower their gaze.