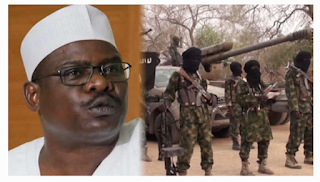 Ali Ndume, the Chairman of the Senate Committee on Army, has said insurgents who have been surrendering would disclose their sponsors.

The lawmaker, who represents Borno South Senatorial District, hardly hit by Boko Haram insurgency, mentioned that the surrendered terrorists will be useful in providing information to security agencies in order to end the insurgency.

“Most of them will disclose those who were their sources or their sponsors if any, and where they are getting the equipment or the arms and ammunition they have been using and they will be useful in providing information to our security agencies in order to finish the business at hand and that is winning the war,” Mr Ndume said to reporters after meeting President Muhammadu Buhari on Friday.

He added, “I think we are getting there because they themselves had the number, the number coming up to surrender is always increasing. I know in Cameroon, over 1000 of them surrendered and most of them are Nigerians. The Borno State Government is making arrangements.

Mr Ndume said the surrendered insurgents cannot be assimilated back into the society with proper vetting according to global best practices.

“What I’m saying initially, and I still maintain this position, is that as much as we welcome the surrender of Boko Haram, it is very important that we follow the due process, according to the law of the land and the international law.

“That is to say, take them in, profile them, process them, investigate them, interrogate them and then those that are innocent, should be let go, and those that have blood in their hands, they should be appropriately prosecuted,” he said.

Mr Ndume emphasised that the Borno State governor, Babagana Zulum, alongside other stakeholders were working on how best to handle the situation.

“As I said, the governor is on top of the situation. The people are carried along, even the victims are being carried along.

Last week, Mr Zulum met with security chiefs and others Borno citizens to discuss how to handle the issue of the surrendered insurgents. At the end of the meeting, it was said that the Borno people had agreed to forgive and let go.

But Mr Ndume says the matter was beyond just forgiveness.

“It’s not the forgiving that is the problem, it is the issue of if you forgive somebody that has done something so horrendous like that, and you are not sure that he’s not coming back or see repentance and all that.

“Besides, as I said, if somebody has blood in his hand, and it’s not your blood, do you have the right to say, ‘go, you are forgiven? He said.

“That is what the intelligence agencies are trained to do. We have well-trained intelligence personnel in various armed forces and security agencies,” he said.

“In Nigeria, we have good intelligence officers that if they are given the chance and they are given the time, they will go deep into it to find out and that’s why I say as they surrender, they are taken in and be processed and attention should be on the victims,” the senator said.