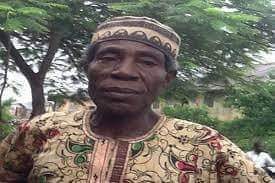 Chief Awodeyi Obagbalode now lives  in Iyere- Owo, his home town where he located to many years ago after leaving Lagos in 1983.  He is a great artiste. He is a multi instrumentalist  - he plays organ, flute , guitar and sings. He is also a wood  carver. He paints and he used these skills when he was performing with the late Afro King musician Fela Anikulapo Kuti and the African Kenneries  late Orlando Owoh, in their hey days.

He is popularly known as Vasco Dagama.

In his art  Gallery are various artworks from paintings to carvings. Hung on the walls of his gallery  are paintings of various musicians like Michael Jackson, Fela Anikulapo Kuti, Orlando Owoh and many more. He carved a human head from a small tree growing in his compound .For this septuagenarian man , his handiwork makes him happy as they are his source of his happiness . As this Reporter was with him he would once in a while glanced at his carvings  and  sang some of the tracks  where the late Orlando Owoh sang his praises  , he sang some Fela's songs  and as the interview was going on  Vasco da Gama  as he is fondly called lighted  a stick of cigarette,  looked at this reporter  and in his baritone voice  mocked and  said " Yes, I smoked Indian Hemp while in the  Nigerian Army , with Orlando and with Fela.I have no regret smoking it , but for my old age...., " , he paused and added ' it is not everybody  that can cope with Indian hemp"

How I  earned the nickname- Vasco da Gama

Only very few people or his childhood friends know his real name as he is fondly  called Vasco Da Gama. He gave the  genesis  of his name , "My name is Awodeyi Obagbalode but I am known all over the world as Vasco da Gama. When I  was in primary school  while everybody was giving himself nicknames I chose to be called  'Vasco da Gama'. I read about this man  who was an explorer in World History and that was how the name stuck on me till date, only few people know my name''.

How I met Fela

Vasco da Gama who was once enlisted in the military boasted that he joined the military as a Corporal in 1968 and was in the Military Band in Lagos playing for the military when he met Fela , his words" I was in a Military Band called St. Augustine. We once waxed a record called ' "Asewo no bi Work , Na management". Fela was there and when he saw my performance he called me to come and join him. but when I told him I was  still in the Army. He asked how much they were paying me and I told him. He called me and like an obedient servant I followed him".

Vasco da Gama  , will not forget easily about FESTAC 77 , he said "that was when I even knew Fela when FESTAC 77 was about to take place. Of course  I had already known  Fela  before then but I later went to join his Band in 1977 . I remember what happened then ,  it was Fela who was asked to come and do the Opening  Glee  but he quarreled with the Federal government over it .They had invited him to come to FESTAC  77 venue to perform but he told the Federal government to rather come to his shrine at Kalakuta Republic, he bluntly refused  to go out of his shrine .That was how they invited  King  Sunny Ade  to come and  play and do the Opening  Glee since Fela's demand could not be met by the Federal Government".

Drama at the FESTAC 77

Vasco da Gama said he would never forget in a hurry many things that happened during the festival, he said " They had worked the gas to light torch flame ,but the late Duro Ladipo one of the greatest Yoruba Cultural Artistes declined and said no, since it is an African festival it should it should be done in African way .Later Ladipo and  and his wife, Biodun went round the National Theater  seven times and the seventh time he (Duro Ladipo) stretched out  his hand and fire  sparked from  nowhere , there was thunder and lightening , and fire came out and everybody  shouted .It was a drama I will never forget in a hurry. Duro Ladipo used African power, He was powerful and he dazed all. Later King Sunny  Ade   went to the podium and did  the opening glee where he sang " Welcome , welcome Ladies and gentlemen , you are welcome to Africa where the festival is taking place here in Nigeria in Africa ...." , this was another great song that sank into  everybody's mind to date.''

"I had known Fela  so much and we became intimate , at night I would go  and  play in his Band  .One day he told us about his film he was about to produce , and the film's title is the 'Black President' in Ghana .One day  we were in Kampala Hotel in Ghana when the policemen came to arrest Fela  but   it was the then Military head of State Flight Jerry Rawlings who came to rescue him".

"I was there when the Kalakuta Republic was razed , it was one  John Uman who took our machine and went out but he took one way in order to be faster , for road construction was going on ,at Ojuelegba  that was why he took one way but  he was pursued to Fela's compound and the Traffic Warden, and the official [Traffic Warden] was beaten .Later some policemen  came and were beaten , later  many Soldiers  came and they beat  everybody while  Fela's  mother was beaten and thrown  down from upstairs .They then set the house on fire .It was hell.

"We had a generator which was in a Bedford lorry and ....when they took light , it was wired with the barbed wires , .....and the soldiers came to set the house on fire and that was how the film , Black President was burnt ".

Fela was beaten , Kalakuta was burnt down, we went to court and in the end they called it unknown Soldier .They paraded some soldiers but how would you know who did it ?. The Judge said it was an unknown soldier that did it .

Fela was generous to a fault , he was not selfish .He would say we all worked for the money and we should equally share the money , ...in that Kalakuta Republic there are some Lagos boys who hibernate in his house , free food was 24 hours, drinks same , ganja etc, he would tell you we equally worked for it.

Fela was a millionaire before Millionaire , he was highly  connected , when his house was burnt foreigners came , Kitigaya, Steve Wonder, Peter Tosh  and many other international musicians came to sympathize with him , they brought a vehicle for him.He later moved from Mushin to Ikeja".

"We knew ourselves from home before I joined the army , but in 1969 we were in Garrison , there was one man  from Ifon in Ondo state called Major Adewoyi who came to meet Orlando ( and later invited him to Agbor)  that was where he sang the song of Madam Dupe .... They had bought vehicle and instrument for Orlando  , and finally when I came to Lagos I was going out to play with him , he used to settle me differently , I was an instrumentalist .I take Indian hemp ,as a military man, we 'eat' it  like roasted  yam but it is not good for 'Omoluabi' ( a responsible man) to  smoke it ,

"In smoking Indian hemp Orlando cannot compete with Fela ,Fela had a wrapper  who had no other job than to be wrapping Indian hemp for him.While Orlando will not smoke Igbo in the public  , but Anikulapo May God bless his soul , he takes Igbo every hour".

Vasco da Dagama  finally relocated to his country -Iyere , Owo in Ondo State in December 1983 , he said he was hearing voices to return home  "whenever I slept I would be  hearing  some  voices  instructing me to go home , to go home, then  I would be playing Orlando's music , Ero ki yeye mi  o ba dele o ( greetings to my mother at home).

Combination of his talents

On his multilateral talents, he said "I did not train under anybody. God gave me the gift , I was even an actor in theatre.I was the one leading in the class when I was in the primary school and I did not know I could  draw .When I was with Fela  there was a boy called Lenin Garoko who was designing Fela's album , I used to go and play with him in his shop , later I thought I could do it and Lenin encouraged me and I focused on it .I joined OCB Ade another musician and was playing jazz for him ,We waxed a record  but money became the problem and I told them the truth but we parted ".

''I was not permanent with Orlando as a Band  member .When I heard  of his death I was sad .He was a man. He would be remembering me as Awodeyi .

One day Orlando came at 4pm to play , and he was to play for one Colonel Aina , but he went to play in two  places and there was trouble .

''He was not selling cocaine   , he was more popular abroad than in Nigeria .They arrested him many times over Indian hemp , and when his place was searched they found cocaine in his house , but his wife said she was the owner". The Multi talented musician praised the late Orlando's wife for defending her late husband over the drug , he said "That Sade was a great woman ,you can't have another woman like that , she was a great woman " , he kept repeating the words while nodding .

On why there are rivalries among the musicians ?

According to da Gama fans are the ones causing it, for example Bob played a tune in guitar for Sunny Ade and it was translated negatively to hurt another musician and that he was referring to Obey  while when Obey played his own guitar they claimed it was referring to Sunny Ade.

Due to this rivalries I could remember Bobo Aladeniyi, Adeyeye Salaja , Arakatura .There was a time some perceived enemies were accused of seizing Salaja's voice .Bob played guitar and it almost caused problem between him and Sunny , they turned it to ' Haa, Guitar Sonu, Obey wa ti, Sunny mu' ( When Obey's guitar got lost , it was searched for but it was Sunny who took it  ) and it was the fans that caused all these"

"Yet these musicians love themselves", according to Dagama "If you are not closer to them you will not know, they are the greatest enemies in the public eyes and among their fans yet they are best friends"

On his age, the multi talented artist said ''I am getting old,that is why I come down to Iyere- Owo my home town in Ondo a State to stay''.

This man is getting old and lives on printing job and carvings where he makes little money to survive.He has made Owo proud.He deserves to be honoured.Please Owo indigenes home and abroad let us honour this man before it is too late.