THE MBARI CLUB - The Naija Weekly 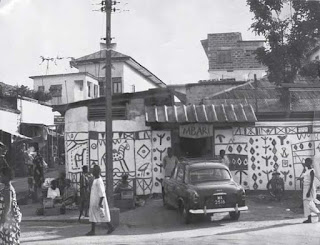 In the year 1961, in an old Lebanese restaurant at Dugbe market in Ibadan, a bunch of writers and visual artists, came together and founded what came to be known as the Mbari Club. The club was founded with the help of Ulli Beier, a teacher at the University of Ibadan.

The philosophy of the Mbari Club was that the arts operate from the centre of the culture, and is located in its historical heritage and traditional values which educate the masses and reflect the society’s values.

Mbari became a major confluence for Nigerian artists, but also attracted artists from across Africa. The club was so prestigious, it had the best artists in Nigeria as members – the likes of Chinua Achebe, Wole Soyinka, Christopher Okigbo, Demas Nwoko, John P. Clark etc.

At Mbari, open air performances were done by artists, there was a gallery where painters and sculptors exhibited their works and there was a library.  Visual Arts giants like Yusuf Grillo, Bruce Onabrakpeya frequented the club and showcased their works.

The Premieres of Wole Soyinka’s “the Trial of brother Jero and JP Clark’s “Song of a goat” were staged at Mbari. It was also at Mbari that renowned Nigerian Singer, composer and activist, Fela Anikulapo-Kuti made his debut as a bandleader.

In its days, Mbari was host to internationally renowned artists like US poet Langston Hughes, and Jacob Lawrence, possibly the most widely acclaimed African American artist of the last century to either play or exhibit their works.

Ulli Beier, the German scholar who had helped the artists establish the club, began publishing the “Black Orpheus” literary magazine. At the time, the magazine was a platform for African writers to have their stories published without having to wait for journals in the UK or US.

Mbari was considered to be the only Africa-based publisher publishing titles by African authors like JP Clark, Wole Soyinka and Christopher Okigbo.

Mbari became the home for art, and the exhibition of the talent of the African continent and the new born Nation, Nigeria by giving visibility to the artists. Unfortunately, the breakout of the Civil war in 1967 interrupted probably the most successful movement of artists in Africa and the diaspora.

Peep that Peugot 403 parked in front of the club.