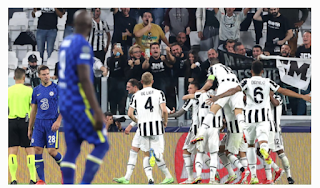 Chelsea suffered their second defeat in a row as Italian side Juventus defeated the Champions League defending Champions 1-0 in their group H encounter Wednesday night.

Both teams went goalless in the first half until the home side took advantage early in the second half to net a goal.

Frederico Chiesa gave Juventus the lead at Allianz Stadium, scoring just 11 seconds into restart, the only goal of the game.

The Blues made efforts to get an equaliser dominating the game with 75 per cent ball possession and 16 shots but Juventus put up a solid defence, securing a crucial win at home.

Romelu Lukaku and Kai Havertz had chances to score and equaliser for Chelsea but both failed to do so.

With six points from two games,  Juventus stay top of Group H, while Chelsea are second on the group table with 3 points in from two games.