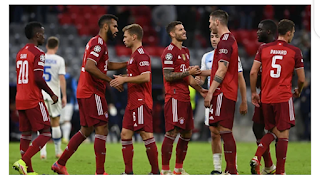 Robert Lewandowski scored twice for the second straight Champions League game this season as Bayern Munich cruised to a 5-0 home win over Dynamo Kiev on Wednesday.

Lewandowski claimed the 76th and 77th Champions League goals of his career as Bayern cantered into a two-goal lead at the break before Serge Gnabry, Leroy Sane and Eric Maxim Choupo-Moting netted in the second half.

Lewandowski also hit a brace in the 3-0 drubbing of Barcelona a fortnight ago and, in total, he has scored 24 goals in his last 18 Champions League appearances to bolster his credentials for the Ballon d’Or award at the end of November.

The result means Bayern top Group E, two points clear of their next opponents Benfica, who beat Barcelona 3-0 in Lisbon on Wednesday.

“We did pretty well,” said man-of-the-match Sane. “We kept things calm at the back, showed our dominance and we were strong in our finishing.”

The 25-year-old appeared to have scored the goal of the night when he sent the ball flying into the net from the left wing, but he admitted it was a fluke.

“No, it wasn’t intentional, I just wanted to put a good cross in. My technique isn’t that good,” he said with a smile.

Dynamo Kiev coach Mircea Lucescu picked a defensive line-up designed to contain the Bundesliga champions, but the hosts took the lead with less than 12 minutes gone.

Kiev captain Serhiy Sydorchuk handled in the area from a Joshua Kimmich corner and Lewandowski converted the resulting spot-kick in front of 25,000 fans, a third of the Allianz Arena’s capacity due to Bavaria’s Covid-19 regulations.

The Poland striker scored his second when Bayern’s relentless pressing led to Thomas Mueller threading a pass between two defenders for Lewandowski to fire home on 27 minutes.

This was the 19th Champions League game in which Lewandowski has scored two or more goals.

It threatened to turn into a first-half rout as Sane’s shot smacked against the post 10 minutes before half-time.

On one of the rare occasions when Dynamo got out of their own half, Uruguayan winger Carlos de Pena forced Manuel Neuer to tip the ball over the bar.

Poland international Tomasz Kedziora and Volodymyr Shepelev came off the bench to help the visitors repeatedly thwart Bayern after half-time until Gnabry hit the net on 68 minutes.

Sane went close on two occasions, before Gnabry finished off a counter-attack that started in Bayern’s box.

With Sane, Mueller and Lewandowski sprinting up in support, Gnabry went it alone and fired in a superb shot which crashed in off the underside of the crossbar.

Sane’s attempted cross then caught Dynamo goalkeeper Heorhiy Bushchan off guard as he was beaten at his near post.

Lewandowski trudged off to a standing ovation with 11 minutes left and his replacement Choupo-Moting headed in Bayern’s fifth in the dying stages.