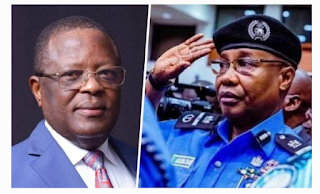 Governor David Umahi has withheld N100 million largesse and political appointments from indigenes of Effium and Ezza for attacking police and military formations in the state.

The Ebonyi government condemned the attack on military and police formations following the deployment of security personnel to the area to restore peace and order in the crisis-ridden Effium-Ezza community in the Ohaukwu local government area.

Uchenna Orji, the Commissioner for Information and Orientation, disclosed in a statement that the attack was unwarranted.

The government condemned the “senseless attacks” on security agencies deployed to protect lives and property in the communities.

“We have seen that the stakeholders and youths in the area are not truly committed to peaceful co-existence despite the interventions by government and efforts of security agencies to halt all hostilities in that community,” the Ebonyi government explained. “It is noteworthy to mention that the state government, considering the conditions of the people, especially the aged and other vulnerable persons, set aside N100 million in the first instance to rehabilitate these helpless people both at Effium and Ezza.”

The money was meant to “mitigate” the socio-economic conditions of the people.

“It is, therefore, obvious that the stakeholders and the youths are the reason for these lingering disputations. Let me state it clear that government will continue to do everything possible to protect the lives and property of the people of Effium/Ezza,” said the commissioner.

Mr Orji added that the government had withheld the N100 million.

He added, “The executive council further took a decision that without prejudice to the elected public servants, no person from Effium/Ezza-Effium shall be appointed into the state public service till such a time government is convinced about their commitment to peace in their community.

“Government may consider stopping further execution of government infrastructural programmes in that community until total peace is returned.”