Umahi won’t blackmail us to zone presidency to South: PDP - The Naija Weekly

Umahi won’t blackmail us to zone presidency to South: PDP 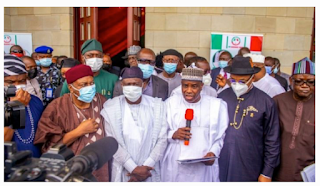 The Peoples Democratic Party says it cannot be blackmailed into zoning its political offices, which would happen at the appropriate time before the party convention scheduled for October 30.

The party stated this in a statement issued in Abuja on Saturday in reaction to Ebonyi state governor David Umahi’s comment on the zoning of the presidency by the PDP ahead of its national convention.

Mr Umahi had accused the PDP of not being ready to zone its 2023 presidential ticket to the South. On Friday, he claimed in an interview that the PDP, especially its Southern governors’, knew that the party would not zone the presidency to the region.

The PDP Governors’ Forum, in a statement by its Director-General, C.I.D Maduabum, said it was outraged by Mr Umahi, who left PDP for the All Progressives Congress (APC), for attempting “to turn truth on its head”.

He advised Mr Umahi, who he accused of sabotaging the PDP in the 2019 presidential election in the state, to continue his role in the APC and leave the PDP alone.

On the issue of Zoning, Mr Maduabum said, “PDP is an independent political party with workable structures and methods of doing things. It’s not an appendage of the APC or indeed of any other association or group.”

He added that “The PDP will take its decision on the issue of zoning political offices at the appropriate time. Even the APC has not taken any decision yet on zoning.”