US Navy declares 5 sailors dead after helicopter crash in Pacific 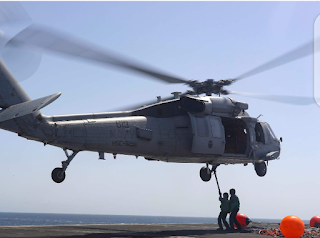 The United States Navy’s Pacific Fleet has declared dead five crew members who went missing after their military helicopter crashed into the sea off the coast of San Diego, California, earlier this week.

In a statement on Saturday, the fleet said it had “shifted from search and rescue efforts to recovery operations” after the MH-60S helicopter crashed into the Pacific on August 31.

The helicopter took off from the USS Abraham Lincoln and crashed into the ocean on Tuesday afternoon while “conducting routine flight operations approximately 60 nautical miles off the coast of San Diego”, the fleet said.

“As a matter of respect for the families and in accordance with Navy policy, the identities of the Sailors will be withheld until 24 hours after their next of kin have been notified.”

Also injured on Tuesday were five other sailors who were on board the USS Abraham Lincoln aircraft carrier. They were in stable conditions as of Saturday, said Lieutenant Samuel R Boyle, a spokesman for the Pacific fleet.

An investigation into what caused the crash is continuing, but the fact that sailors on board the carrier were injured raised questions about whether the helicopter or parts of it hit the Lincoln.

When helicopters take off and land on the ship, there are ground crews present on the carrier nearby and other people working on deck.

The MH-60S helicopter typically carries a crew of about four and is used in missions including combat support, humanitarian disaster relief and search and rescue.