U.S. to run out of money by next month: Treasury Secretary - The Naija Weekly

Home Foreign News U.S. to run out of money by next month: Treasury Secretary

U.S. to run out of money by next month: Treasury Secretary 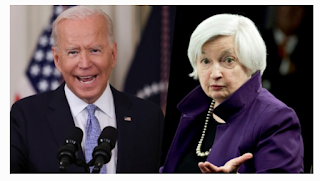 The United States Treasury Secretary Janet Yellen has warned that the U.S. risks running out of money by October 18.

Ms Yellen’s warnings came as Republicans in the Senate opposed an increase in the borrowing limit.

“At that point, we expect the Treasury would be left with very limited resources that would be depleted quickly,” she said in a letter to Congress. “It is uncertain whether we could continue to meet all the nation’s commitments after that date.”

Ms Yellen repeated her warnings when testifying before the Senate banking committee, saying a default “would undermine confidence in the dollar as the reserve currency, and the interest payments of ordinary Americans on their mortgages and on their cars and on their credit cards would all go up in line with higher Treasury borrowing costs.”

On Monday, Republicans in the Senate voted against a bill slated to raise the U.S. borrowing limit.

The bill was supposed to extend funding for the American government as current funds are projected to run out by September 30. The bill would have extended funding to keep the government open till early December.

In a report by Financial Times, the president of the Federal Reserve Bank of New York, John Williams, explained that investors could become “extremely nervous,” leading to an “extreme kind of reaction in markets.”