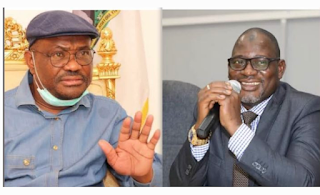 Rivers Governor Nyesom Wike on Friday inaugurated the state’s Tax Appeal Commission shortly after the Abuja Division of the Court of Appeal ordered maintenance of status quo in the collection of value added tax by state governments.

The commission inaugurated by Mr Wike is saddled with the responsibility to ensure taxable persons and entities comply with the rules of the newly introduced Rivers VAT law.

Mr Wike had on August 19 signed the VAT Bill into law following the judgement of the Port Harcourt Division of the Federal High Court on the illegality of VAT collection by the federal government via the Federal Inland Revenue Service, FIRS.

At the inauguration ceremony in Port Harcourt, Mr Wike urged the commission to “focus on dealing with complaints arising from those who do not want to pay their taxes, while also prevailing on those who believe that the tax body is doing what it is not supposed to do.”

“It is a very serious assignment at this period as regards to what is going on. So, I believe that you have to take this assignment as a call of duty from your state,” the governor explained. “No country can survive without taxes. And so, you will do all you can to support the government and the citizens to do what they are supposed to do,”

The governor’s remarks were contained in a statement by available to Peoples Gazette by his spokesman Kelvin Ebiri on Friday.

The governor, however, expressed confidence in the chairman of the commission to effectively carried out the assignment.

In his response, Mr Ugbari, a retired judge, agreed with the governor that the state needs to generate enough internal revenues to augment the statutory allocations it receives from the federal government.

He noted that the newly introduced VAT will enable the governor to fulfill his promises to Rivers people in terms of infrastructure and other development.

“It is, therefore, the intendment of the commission to partner with other relevant tax authorities in Rivers State to generate adequate internal revenue for the State,” Mr Ebiri quoted Mr Ugbari to have said.

Meanwhile, the Abuja Division of the Court of Appeal, on Friday, however, ordered that Rivers State and the FIRS maintain status quo ante bellum, pending the determination of a suit filed by the latter concerning the Rivers court judgement.

Like FIRS, many northern states like Katsina, Gombe and Kogi have registered their protests against the move by Rivers and Lagos to begin independent collection of VAT. Adamawa State government however says it was ready to explore the new VAT reform.

Lagos Governor Babajide Sanwo-Olu had also signed the state’s VAT Bill into law on Friday following the speedy passage by the State Assembly. The state is also seeking to be joined in the FIRS’ suit at the appellate court.

Earlier, the FIRS had urged taxpayers to discountenance the High Court ruling in Port Harcourt.

In another desperate move, the federal tax body wrote to the National Assembly, seeking amendment of the Constitution to exclusively grant it the rights to collect consumption taxes, among others, across the country.