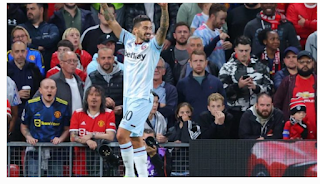 West Ham on Thursday made it to the fourth round of Carabao Cup, beating Manchester United by a lone goal at Old Trafford.

The Hammers were able to take a revenge of the home defeat they suffered to Manchester United during the weekend.

M Lazini gave the Hammers an early lead at Old Trafford, scoring nine minutes into the game courtesy of an assist from Fredericks.

Manchester United dominated the game but West Ham defenders put up brilliant performance shield the Red Devils from scoring at the Old Trafford.

West Ham will face Manchester City in the fourth round of the competition.