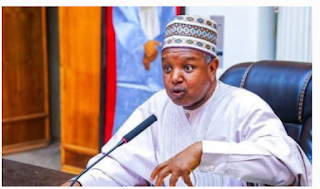 Kebbi Governor Atiku Bugudu says Nigeria is “peaceful” while dismissing heightened insecurity in the country as the work of those wishing Nigeria evil.

Mr Bagudu’s statement comes while over 80 abducted students of the Federal Government College (FGC) Birnin Yauri remain in captivity for 90 days and counting since they were captured on June 17.

Speaking at the Argungun Polo Tournament final over the weekend, Mr Bagudu said, “That we are gathered here today, celebrating the end of this year’s polo tournament shows that Nigeria is demonstrating its successes and potential.”

Dismissing increased insecurity, Mr Bagudu said many people do not wish Nigeria well and were instead “portraying insecurity as if it is the order of the day.”

Referring to the sportsmen, he said, “That we are seated here without armed guards watching them, enjoying themselves, celebrating with each other, shows how peaceful Nigeria is in spite of pockets of incidents which are on their way to ending.”

Contrary to Mr Bagudu’s stance, former Governor Sule Lamido of Jigawa says northerners are happy with the APC regime despite wanton violence ravaging the North because President Muhammadu Buhari is one of their own.

Bandits have ravaged the North-West, kidnapping and killing several people, forcing schools to close many weeks in several states in the region.

In July, a Nigerian Airforce jet was bombed by bandits in Zamfara, while Nigerian Defence Academy in Kaduna State was raided with two killed in August.