27 migrants in search of greener pastures sink between Turkey, Greece - The Naija Weekly

27 migrants in search of greener pastures sink between Turkey, Greece 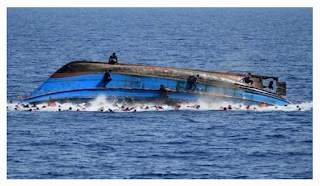 A boat with 27 migrants on board sank in the waters between Turkey and the Greek island of Chios on Tuesday.

A NATO ship, two helicopters and several coastguard boats, as well as passing ships, are taking part in the rescue operation.

The local media reported that strong winds are hampering the search.