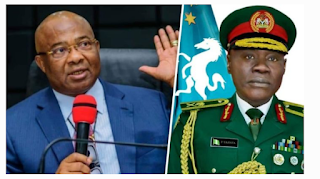 Following the death of two soldiers and a resident, Governor Hope Uzodimma on Tuesday called for a peaceful resolution of the crisis that rocked Izombe in the Oguta local government area on Friday.

Youths of the community collecting toll from oil thieves had an altercation among themselves, and soldiers moved into the community to quell the crisis.

Two soldiers and a member of the community were killed; houses, vehicles, and crops were destroyed.

Mr Uzodimma, who visited Izombe on Tuesday, directed the Imo State Oil Producing Areas Development Commission to send relief materials to the area to cushion the effect of the destruction.

The governor expressed shock at the destruction inflicted on the community and charged the warring parties to maintain the peace.

He added that a situation where criminal youths took over affairs of a community and became uncontrollable was detrimental to peace.

He expressed regret at the loss of lives and the destruction of the community, appealing to the Izombe community and the army to sheathe their swords.

He added, “Government will set up a committee to look at the level of destruction, its impact on the people and community and find a way to assist them.”

An Izombe community leader, retired Gen. Kalu Egwuagu, said the governor’s visit was “a soothing balm on the wound being nursed by both Izombe people and the military.”

Mr Uzodimma also mentioned that the circumstances surrounding the mayhem were quite unfortunate and thanked the Commandant, 34 Artillery Brigade, Obinze, in Owerri, Brig.-Gen. Raymond Utsaha, for “his listening ear.”